I traveled around the World mainly on three Continents. These trips built up my personality and inspired the person I am today.

I have always been a great fan of Startup Weekend. In 2014, I imagined a World Tour through which I will attend as many Startup Weekend as I can! I got the green light of the American organization and started working on the project. On September 2015, I left home for the greatest adventure of my life! I visited 25 countries and attended 16 Startup Weekends and Hackathons over 10 months.

One day, I saw the famous movie of Walter Salles Motorcycling diaries which tells the incredible motorbike trip of the Che accross South America. In Medellin, I bought a 125cc Pulsar and went traveling all over the North of the country. 3 000 kilometers and 16 days after, I had realized one of the greatest adventure of my life! 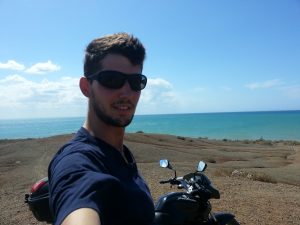 In 2014, as I was preparing myself to go to Medellin, Colombia for my last year of study, a World Cup was getting ready in Rio de Janeiro, Brazil. There was no doubt, I wouldn’t miss the event of the year! I decided to fly to Rio and slowly but surely travel 8 000 kilometers higher up to Medellin!